At SCA events, we like to pretend we’re somewhere in medieval Europe, and in order to do that, we use medieval names as well as medieval outfits. There’s no need to pick a name straight away – and lots of modern names, like John or Maria, were used ‘in period’ anyway. But sooner or later, you’ll probably want to pick an ‘SCA name’.Nearly everybody chooses a persona (Or SCA) name, and for some, that is all they choose to do. Others may go into devising a whole history for their new persona and go to great lengths to be authentic to that persona. What you do is up to you. It depends on how much effort you would enjoy putting into it. You can be an Anglo Saxon woman, a Viking raider, a Scottish mercenary or an Italian Renaissance man – the choice is up to you.

Where do I start?

The easiest thing to do is either start with a name you like, and look for a time and place it was used, or start with a time and place, and pick out something from that time. Be aware that you may not be able to get your first choice of name, because of the two main rules of name registration:

Are there any restrictions? What am I able to use?

By talking to a friendly herald, they can help guide you to find a name and develop a persona that is accurate and fun for you to engage with. However, for your convenience, the following are some of the guidelines you should follow when choosing a name and persona. This still leaves you with many options.  You should try to choose a first name that you like and that you will answer to (because people will be calling you by it).

Acting out a persona

It can be fun to act out your persona.  A conservative accountant can become a wild Scottish warrior or a bank teller may become a pampered Elizabethan courtier. This is the fun part of a Persona. Personas can cause problems if taken too far. We consider everyone to be noble – we treat no one as a villain or peasant.  If the 12th century Crusader and the Islamic tribesman take their roles too seriously conflict may result.  This is why, in the SCA we are all at peace, no matter if our chosen cultures are at war. We also try not to disparage religious beliefs, even in jest.  The SCA has Christians, Muslims, Hindus, Pagans and every other religion under the sun, and it is not right to offend peoples deeply held beliefs. The main yardstick of persona is if it offends, don’t do it. 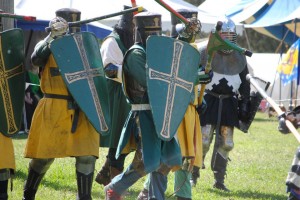 Why bother with Heraldry?

The short answer is that it adds to the fun. The use of heraldry in the SCA adds to the medieval atmosphere and gives you an opportunity to more visibly embody the persona that you have created.  The brightly coloured banners blowing gently in the breeze. The unique designs on fighter’s shields, the use of heraldic devices in garb all contribute to the look of the SCA. You may want to incorporate your heraldic device into several of your possessions to help people recognise you ( Which is very useful when your face is obscured inside a helmet ), and further develop the persona that you want to explore as part of the SCA. Groups of people also have devices, including our barony. By applying group heraldic devices to a war unit, you can help them easily determine friend and foe, and demonstrate to your opponents that you mean business!

A device is the thing you think of when you hear ‘coat of arms’: a colourful design painted on a shield that represents an individual, group, place, or family. (If you receive an Award of Arms, your device is called your ‘arms’ from that point onward.) In the SCA, everyone is encouraged to choose a personal device and register it with the College of Arms. It’s a fun way to add to your personal display, and you can put your device on a shield, a banner, and lots of other items. You can also register a ‘badge’, which is similar to a device, but is generally used to label things associated with you rather than to represent you in particular. Your device/arms/badge are sometimes called your ‘heraldry’.

Who can I ask for help?

The SCA College of Arms has branches in every group, and its officers are called ‘heralds’. They learn the rules and regulations of our name and device registration system so they can help people like you pick out heraldry to use. If you’ve got any questions about names and devices, you can ask our Baronial Herald at herald@politarchopolis.lochac.sca.org.